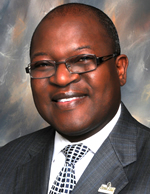 Sheyi Ipaye is a Certified Public Manager (CPM), and a Harvard Kennedy School of Government Senior Executive Fellow.  He has provided executive leadership and direction to three Texas cities as City Manager including the City of Palestine and the City of Glenn Heights.  For more than a decade, he is now the longest serving City Manager in Forest Hill responsible for the day-to-day administration and operations of the City. He has earned the reputation as a results-focused "go-to" manager.  Appointed by the Mayor and City Council to transform the city and improve the community's public infrastructure, he has appointed executive leadership for both the Police and Fire Departments, reorganized departments, streamlined business systems, improved customer service, and elevated the professionalism of his staff.  Using the City's core values of “Teamwork, Integrity, Innovation, and Professionalism through Excellence” under the moniker of its slogan “Community Driven,” as Chief Executive Officer of the City, Sheyi has continued to deliver a balanced budget.  He manages an annual operating and capital budget of $25 million dollars for a growing community now with a population in excess of 14,000 residents.

Ipaye has consistently lowered the city’s property tax rate, increased financial reserves, and reduced waste. He supervised construction of the Forest Hill Civic and Convention Center and the Forest Hill Memorial Park.  Under his fiscal leadership, the City of Forest Hill's Insurance Services Office ISO rating improved from a 5 to 3, helping to reduce insurance costs for many citizens.  Forest Hill’s General Obligation Bond Rating was upgraded by Standard and Poor’s Rating Service from an “A” to “A+,” a first for the City of Forest Hill. Since 2010, the City has consistently received the “Distinguished Budget Presentation Award” from the Government Finance Officers Association (GFOA); he has presented the award ten years in a row to the Mayor and Council.

Previously, Ipaye served as Community Investment Manager for the Federal Home Loan Bank of Dallas for a decade.  He was responsible for its $550 million dollar community development loan programs in Arkansas, Louisiana, New Mexico, Mississippi, and Texas.

Throughout his career, he has consistently given back to the communities in which he lives and works.  He is a member of Forest Hill Lions Club, has served on the Texas City Managers Association’s Nominating Committee, and has volunteered with the International City & County Manager Association (ICMA), Committee on International Affairs dealing with issues around the world.

Sheyi Ipaye is a strong family man who likes to lead by example. He has been married to his lovely wife Emma for more than 35 years. They are blessed with raising five college graduates.